By Luke Sullivan
Within my first few weeks at Arise Chicago, I remember distinctly speaking with a worker who came in to our worker center who made minimum wage. Our conversation eventually turned to how stressful her life had become. She worked full time and just could not afford clothes, food, schooling and many other necessities for her children. Because of this, she was forced to begin the process of moving to another city to live with her brother. Her children had only known living in Chicago and she was so saddened and downtrodden that she would have to move her children away from the only life they had ever known.
This conversation has remained with me and I think is a powerful example of why the current minimum wage is unfair and unjust. How can someone working full time not be able to afford life’s basic necessities? This is one of many reasons why I was so excited when I was first introduced to the Raise Illinois coalition, a campaign to raise the minimum wage in Illinois. This group hopes to raise the minimum wage to a living wage. One of the many statistics that is used to support this raise is if the minimum wage had risen with the cost of living over the past 40 years, it would be $10.39 per hour today. The coalition wishes to raise it to $10.65 per hour over a four year span and tie it to inflation thereafter. It is not about a handout so all workers can live in great luxury, but about fairness and justice. Plus it makes economic sense: the more money workers have, the more money they are able to spend; if these wages were to increase, the economy will be strengthened.
The Raise Illinois campaign aims to give all families the fundamental necessities to sustain a fulfilling life and to raise a family. It is unjust for members of our community and our state to work full-time and still live in poverty. This is why I was so excited to travel to Springfield, Illinois on December 5th with five Worker Center members, on behalf of Raise Illinois, to educate lawmakers on the need to increase the state minimum wage.
The five workers made the trip in order to share their stories about how, even when working full-time, the minimum wage is so low that it is keeping working families like theirs in poverty. One of the workers, Maria Winnie Gonzalez, while speaking to one state representative who was undecided on the issue, pleaded that being a minimum wage worker did not allow her to “buy clothes, food, and so many other things that my children and entire family need.” 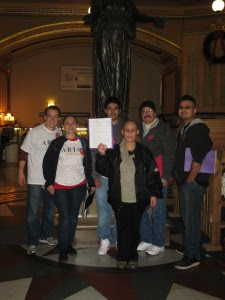 The workers wanted all lawmakers, even those unavailable that day, to hear their voice, so they also left a note in Sen. John Mulroe’s office, which was signed by all the workers, asking him to do God’s Justice and raise the minimum wage to a living wage. It is true that their families and the families of so many of their friends and co-workers need this raise.
As a Dominican Volunteer, my faith is very important to me. Jesus says it succinctly when he is speaking to God, saying, “That they may be one, just as we are one.” I think Jesus is telling us to stand in kinship and solidarity, as one, with all people. In this case, we must stand as one so all workers may be treated fairly and not be left behind. For though we may come from different backgrounds and experiences, we are all children of God; and in that, we share a common humanity.
Throughout these past few months at Arise, there have been several campaigns that also work to demand dignity and respect for all workers. I have seen this through working with the Chicago Teachers Solidarity Committee, the Arise Chicago Car Wash campaign, the Fight For Fifteen coalition, and so many other movements throughout the city. It has never been about gaining great luxuries and wealth, but instead about making sure everyone in society can earn a decent living. For me, these campaigns are all really asking the same question: “Instead of worrying about the bottom line, shouldn’t we be more concerned about the people who line the bottom?” 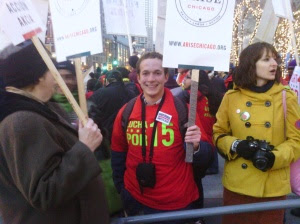 In January 2011, Senate Bill 1565 was first introduced into the legislature to progressively increase the minimum wage to $10.65 per hour and tie it to the cost of living thereafter. Currently, we are hoping the bill will be passed in the lame duck session of Congress in early January 2013. The coalition is asking for your time and your prayers to see to it that God’s Justice is done, and that this bill is signed into law.
Luke Sullivan is the Religious Organizer for Arise Chicago.  This blog post originally appeared on the Arise Chicago blog, Dignity At Work.
Posted by DVUSA Staff at 3:09 PM No comments: