Finding Home Away From Home 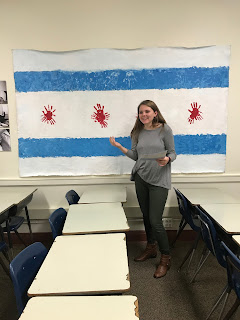 If you asked me where I thought I would be right now this time last year, I am not sure what I would have said. However, I am 98% certain I would not have said living in Chicago, Illinois working at Catholic Charities-Chicago helping refugees and asylees find jobs. Nevertheless, here I am more or less adjusted to life in “The Windy City” (aside from the weather, which I’m not sure I will ever get used to).


People always say, “home is not a place, it’s a feeling”, and prior to this year I would have agreed-hands down, no questions asked. Up until this year, I have lived in exactly two places-my childhood home in Northern Virginia and my college town in Lancaster, Pennsylvania. Both places I think of as home. I moved to Chicago eager to experience city life, and full of hope for the year ahead. I have always been interested in other cultures, and I love learning new languages, so I was particularly excited to be spending my days working with people from all over the world. Hearing their stories and learning about their customs and cultures. The first three weeks of work were my training period, which consisted of going with my supervisor or coworker to job interviews or client’s homes talking with them about their employment goals. It was great. I got to speak Arabic with many of our Syrian, Iraqi, and Sudanese clients.


Then about a month and a half in, homesickness hit me. The allure of riding the train 1.5 hours to and from work disappeared, and the unpredictable political climate made work stressful.  However, day by day as I began to manage my own case load, I realized that my clients and I have some commonalities. The most obvious being that we are all now in Chicago and are trying to figure out how to make this city home. As I walk with my clients through the complicated process of navigating employment in Chicago, I am constantly inspired by their strength and resilience.


NA*, was a tailor in Aleppo, Syria. He and his family fled in the middle of the night when their city was under siege. They lived in Jordan for several years and finally came to Chicago this past spring. NA  first worked at a factory that packages halal snack foods as a dishwasher and janitor. When I met NA in September he told me that he wished to become a tailor because sewing is his passion. After several weeks of phone calls I found a tailoring job in a factory, and despite NA’s limited English, the factory manager decided to give him a chance. I have never seen someone so happy behind a sewing machine, and I am glad he was able to continue doing what he loves.


Another client, T*, was a classically trained ballet dancer in Russia. He and his husband left Russia and emigrated to the United States by way of the Dominican Republic. When they got to the U.S. they turned themselves in to the Immigration and Customs Enforcement (ICE) officials at the border. They proceeded to spend 8 months in jail while waiting for their asylum hearing. They were granted asylum in May. When I first met T in early September, he had been going to English classes for 4 months. He was not very confident in his English capabilities, but he told me that he hoped to work at a hotel after he finished English classes. Two weeks after he finished English classes he got a job at one of the hotels on the “Magnificent Mile”. One of the most memorable things that T has ever said to me is “You have a good job because you help people like me and God sees that and smiles down on you”. “I hope to someday do the work that you are doing”.


It’s the little things like watching NA use a sewing machine, or hearing words of encouragement from T that truly make this job so great and remind me that no matter where you are, you can feel at home. I am so thankful to have had this opportunity to be a Dominican Volunteer, and I cannot wait to see what is in store for the rest of the year.


*Name was abbreviated to protect anonymity 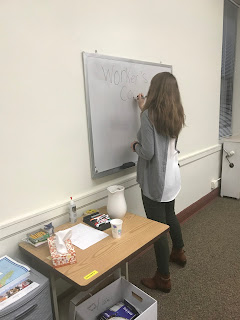