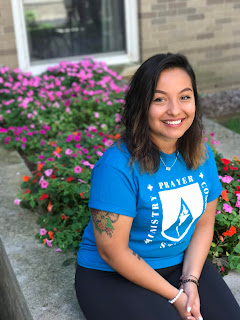 2017-18 Dominican Volunteer, Stephanie Zavala: “In New York City, a black woman is 12 times more likely to die during pregnancy, during labor, or from complications after labor.”

And from an NPR report, “A 2016 analysis of five years of data found that black, college-educated mothers who gave birth in local hospitals were more likely to suffer severe complications of pregnancy or childbirth than white women who never graduated from high school.”

In this two-part video, Dominican Volunteer Stephanie Zavala reflects on her calling to be a doula, an advocate and support to mothers during the birthing process. Stephanie was inspired to become a doula through her work at the Siena House, a homeless shelter for mothers who are pregnant and mothers who have young children in the Bronx. Stephanie seeks to offer her doula services to black, brown, and undocumented mothers who face systemic hardships and  barriers.
Thank you for your service, witness, and words Stephanie.

Correction: in the second part of the video, Stephanie meant to say “black maternal mortality rate" rather than black mortality rate.