"The Holy Spirit is palpably present"

In our most recent blog post, 2014- 15 Dominican Volunteer Juan Miguel Alvarez reflects on his recent trip to the Vatican to witness the canonization of Archbishop Oscar Romero. Juan Miguel also  tells of his spiritual encounter with Pope Francis and how both men  continue to shape his faith journey.

1.                  What   was it like to be at the Vatican for the canonization of Archbishop Oscar Romero and meeting Pope Francis and some of the Cardinals? Please give us a small taste of that experience.

I cannot speak on the synod itself since I was not a synod member ,but being close to it and spending time with those who were in it was an exciting and refreshing experience. You could see the passion the youth people brought to this synod – they were a fantastic group of intelligent and deeply caring young people with an enormous desire to improve their Church. I also enjoyed meeting some of the cardinals and bishops I have always admired, such as Cardinal Tagle, Cardinal Maradiaga, and Bishop Robert Barron.

The canonization of Oscar Romero, Paul VI, and five others was a powerful mass. I sat with the auditors, close to the front, with the banners of these saints directly in front of us. As I looked up at them, at St. Peter’s Basilica, Pope Francis, the hundreds of priests, and the hundreds of thousands of people gathered in St. Peter’s Square, I felt overjoyed at the magnitude of the day. Having led a couple of trips to El Salvador and seeing the sites of Oscar Romero’s life, I thought of the wonderful people I met there and I realized how much this canonization meant for them, for Latin America, and for the entire Church. There were Salvadorian flags everywhere, but also people from all over the world. It was a true testament to the universality of the Church.

2.                 What about your experience surprised you and impacted you?
I had so many impactful experiences on this trip. Among them were the canonization mass, my visit to the catacombs of St. Sebastian, seeing the pope’s home, getting some inside-scoop looks into the conclave process, meeting young, passionate Catholics from all over the world, and of course meeting the pope. I was impacted by the levity of Pope Francis. He must have one of the busiest schedules on the planet, yet every time I interacted with him, he was laughing, he was present, and he was relaxed. No matter how tired he was, or how late it was, or how many people had asked for a selfie, his face always lit up when someone approached him for a conversation or a blessing.

I remember two times that I was reminded of my DVUSA experience. The first was during the canonization mass of Oscar Romero. I remembered my family, my friendships in El Salvador, and the families that have gotten to know in Chicago. I thought of my students at Cristo Rey, the families at my parish, Immaculate Conception, and the families I met at Casa Juan Diego. I imagined what St. Peter’s Square might look like one day celebrating the canonization of a young person from Pilsen. The second time was on an afternoon that I was able to walk around and explore Rome’s many beautiful churches and basilicas. I came across Santa Maria Sopra Minerva, a Dominican basilica that is home to St. Catherine of Siena’s tomb. I reflected on the year that my soul crossed paths with Dominican spirituality and thanked God for it.

In different ways, they have both been hugely impactful on my spirituality. Pope Francis has made me reconsider the ways that the Church ministers to all people who seek God; he strives to find the sweet spot where the Church is 100% faithful in teaching the eternal truths we have inherited from Tradition, the scriptures, and the apostles, and also being merciful and charitable in its pastoral approach. He understands that this is not an “either/or” situation, so I have been intrigued and drawn in by his approach. He also has more patience, joy, and dedication than I will ever have. The Holy Spirit is palpably present when you spend even a few brief moments with him. 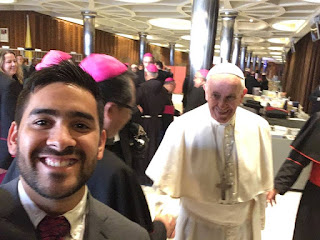 Oscar Romero has been personally convicting and inspiring in my spirituality. He knew better than most the danger he was putting himself by standing up for justice, but he did what his conscience told him to do, regardless of the presence of these life-threatening people and groups. By their own government, the poor of El Salvador were kicked while they were down, stood upon to keep them down, and then brutally murdered. Romero radically and unabashedly lived out the gospel in that ugly reality, so seeing his birthplace, the site of his martyrdom, his home, was something that has made me reflect on the ugly realities that plague my communities – the city of Chicago, the immigrant families I am able to accompany, or my neighborhood – and radically live out the gospel in those places.

5.                 You  and your wife, Yadira experienced this journey together. What was it like experiencing the Vatican as a couple?
It was so life-giving! My wife was one of the few married young auditors; it was great to see how many people went out of their way to welcome and accommodate me as her spouse. They recognized that the role of the auditor was important and that it was, in fact, the reason each of these young people was brought to Rome, but that nothing takes precedence over your primary vocation. First and foremost, we were viewed as spouses – as a family. Through the charity and generosity of so many people, I was able to accompany my wife to nourishing, beautiful events, including the canonization mass, exploring the Vatican gardens, a powerful adoration night in San Lorenzo’s, and of course our various moments with the pope. Getting his blessing over our marriage was unforgettable.